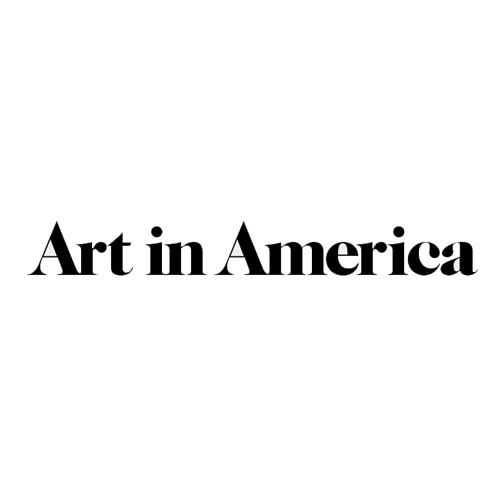 For her first solo exhibition in New York, Brooklyn-based painter Amy Feldman installed four large canvases (all 2012) snugly within the small gallery’s space. These paintings—as big as 8 feet high or wide—present a simple visual grammar that offers a counterpoint to the effusive visual cacophonies of Feldman’s earlier work. In the 2012 paintings, one encounters single geometric shapes repeated in light to dark gray monotones on a white ground. Despite being completely abstract, they are charged with a healthy dose of anthropomorphic humor.

Asserting individuality and character to rehash minimalist and conceptual vocabularies, Feldman critically situates her work in contemporary practice. In All or Nothing, a repeated chevron shape riffs playfully on Frank Stella’s Delta (1958) and “Notched V” series (mid-1960s). She takes up the kind of self-conscious humor Mary Heilmann has deployed throughout her career by similarly retaining painterly drips and mishaps in the finished work. The show’s catalogue traces Feldman’s practice from 2007 onward and offers a means to contextualize the exhibition vis-à-vis her earlier work. A selection of the artist’s small collaged drawings, sparsely populated by sketched, cartoonish images of jewels, magazine cutouts and a USDA food pyramid amid an array of gestural marks, hint at the roots of the large paintings’ abstract forms. One suspects a critique of consumerist Western culture, of the growing abyss between dearth and excess.

The lone, bloated, bulbous donut shape that occupies the preponderance of canvas in Owed is painted in large looping gestures, with haphazard drips of paint splattered on what remains of the clean, gessoed surface. The lower half of the form, which seems to encroach on the viewer’s space, is slightly thicker than the top, so that the upper portion of the canvas effectively recedes. One thinks all at once of a slobbering animal, an overly enthusiastic speaker’s spittle and the sloppy habits of a careless, gluttonous eater.

As the artist has explained, each canvas consists of multiple layers of shapes and marks that coalesce into the final, pared down forms. This underpainting, only occasionally visible, tugs on the viewer’s imagination, suggesting unknowable iterations of the image below. It is as if an invisible level of extravagance has undergirded the work’s seeming simplicity. Add to this Feldman’s loose play of personal, cultural and historical references, and one sees the artist achieving a compelling synthesis of meaning through humble, unpretentious means.