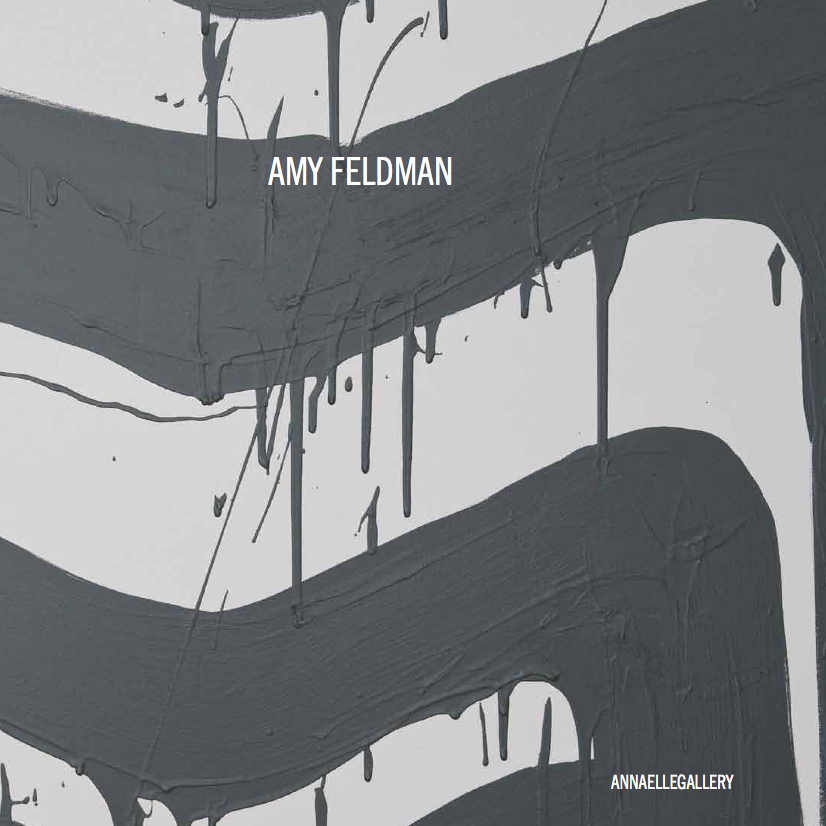 These are seemingly simple pairings of which there could in fact be sa much to say—though the thoughtful viewer will always wonder how to say what there is to say of them, since the paintings themselves, cunningly evasive of the words they nonetheless provoke, offer A little clue as to their preferred verbal accompaniment. Their impact is first of all physical But I’d start by remarking that to really appreciate thorn takes a certain relish for the flavors of gray—a sort of wine taster’s delight in sniffing sipping and rolling around in the mouth of one’s eye (I hope the metaphor is not too grotesque) the subtly distinct achromatic tones of Feldman’s paintings. The differences from painting to painting are delicate, and perhaps in the eyes of same viewers insignificant compared to the graphic force of the big blunt often cartoon like abstract shapes they embody. And subtlety may not be the first thing you’d expect when faced with the sense of enthusiastic energy with which Feldman wallops her paint onto the canvas, leaving splatters flying every which way. Prepare to be surprised. As the artist herself ono put it, her forms are “carefully articulated yet under-polished,” which is to say the deliberate roughness of effect should not distract you from noticing her fastidious attention to rightness of construction. It would be a mistake to see in Feldman’s work only its brash vitality and not the more reflective aspect embodied in these myriad shades of way, the color or noncolor that can never shed its association with the neutral, ambivalent, saturnine, pensive—gray days, gray matte, eminence grise. In painting gray conjures a tradition that includes Jasper Johns, Gerhard Richter, and Brice Marden, and before them Whistle, Manet, and their beloved Spaniards

Keeping Feldman’s romance with gray in mind, consider this For their shared sense of loose, spontaneous geometry and insouciant almost punMsh elan, one would naturally cite Mary Heilmann as the most evident model for Feldman’s brand of unbuttoned formalism. “We artists channel the artists that worked before us,” as Heilmann herself once told Ross Bleckner, of course Feldman channels a host of familiar spirits, going back beyond Heilmann to take suggestions is AI Held and Tony Smith, to be sure, but from the M. of Tex Avery too. But has Hellmann (whose color sensibility one imaginative critic once compared to ‘Me summer-print bathing suits sold at Wal-Mart”) ever made a predominantly gray painting? Having followed her work as closely as I could since 1988, I don’t recall ever seeing one. So how is it that an artist who on other levels seems so influenced by Heil.n has been able to rein in her palette to such a limited range of grays on white? The beginning of an answer would be the observation that in fact Feldman’s palette never does seem reined h. I’m not ready to swear that Feldman’s grays can do anything that Heilmann’s blaring panoply of ripe primaries and juicy secondaries can do—that sill take a lot mom time to tell—but they can do an awful lot, from quasi-rococo fluffiness to quasi-minimalist implacability. I am suddenly reminded of Paul Valery’s observation that “artists need to understand each other just sufficiently to differ. The same applies to philosophers.”

In any case, and contrary to its reputation for blandness, indefinition, and gloom, in Feldman’s hands gray always feels lively and particular, it has bounce. In the push and pull that she sets up between her grays and the white grounds on which she paints with them—and those whites are no more the same from painting to painting than the grays, but that’s another story—both farces are equally active. I asked Feldman once whether she spent more time mixing her paints or putting them on the canvas ‘About the same,” she responded. ‘I can spend a whole day trying out midures, trying to get just the right one.” The act of painting starts well before a mark is ever put on canvas, and the relative slowness of the preparation balances out the boldness and spontaneity of the gestures just as the gray always balances out the white, no mailer how much or how little of either end up in any particular painting Feldman’s work has on occasion been referred to as “drawing with paint on a large scale,” but I have to insist, on the contrary: Whatever it is that Feldman does, it is not “drawing with paint” It is quite simply and guile definitely, painting That Feldman’s gray on white approximates the black on white that we associate with drawing land with writing) is surely a conceit entertained by the pairdings and the canny viewer will find it worthwhile being inveigled by the approximation, but to let oneself forget that it is, after all, only a camparison—that would be a shame. As is the case with most other painters, Feldman’s paintings come from drawings—and the ink used in those drawings is black, not gray—but the drawings and paintings are very different. Only in painting is gray so various. The point is not just that Feldman shows herself entirely the painter by the care with which she miss her grays; !could almost even say that this might not be necessary, because—keeping in mind Matisse ‘s observation that with colors, “as their quantities differ, their quality alsa changes; the colors applied freely show that it is their quantitative relation that produces their quality”—even the same gray would seem different as it appears in different ratios from one canvas to the next.

Another part of the reason for Feldman’s work being painting rather than drawing on canvas, has to do with male, of course—as we would only expect if we understand that the quantity of a color impinges on ffs charades Feldman knows how to give lightness of spirit a monumental presence. But .le is never just a matter of smle. Gala and facture as well as form can help W. painting a scope immeasurable by the yardstick, so those exquisite grays are relevant here too. The kind of sin that matters is what looms up in the imagination before A asserts itself on the wall, and lingers on long after you’ve left the room. By that measure, Feldman’s are some of the biggest paintings being made today.