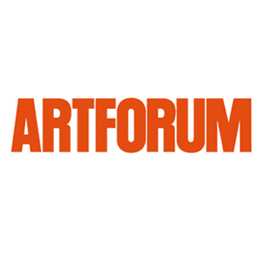 There’s a photograph in the catalogue for Amy Feldman’s exhibition “High Sign” that depicts one of her large square canvases being winched out of the artist’s Brooklyn studio. As the painting hovers momentarily in front of an open garage door, the bushy-looking, ring-like form that occupies its lower three quarters is juxtaposed with the building’s upper windows to give the squat two-story structure what looks like a bearded face. Whether this mildly comical anthropomor-phic effect was intentional is unclear, but the shot nonetheless announces the witty ambiguity of Feldman’s compositions; as Raphael Rubinstein reminds us in his tidy catalogue essay, “serious painters can be great comedians.

Working from small doodles made with a marker, Feldman usually completes a painting in a single session, rarely editing or revising it there-after. As Rubinstein also points out, the viewer’s awareness of this all-or-nothing process helps imbue the work with a sense of performa-tivity and risk; the procedure’s apparent simplicity notwithstand-ing, one feels these canvases arc perpetually balanced on a knife-edge between success and defeat (though it’s not always easy to identify precisely where this border resides). At Blackston, the work (all 2014) at first seemed to teeter toward failure, nudged along by what might sound like a rather ill-advised installation design, with five large panels shoehorned into one cramped room, and walls tinted a shade of gray similar to—hut not quite matching—that used in all the paintings. A counterintuitive setup, perhaps, but it worked.

Feldman generates seemingly endless variations on a vocabulary of simple shapes. The beard mentioned above was not represented here, but there were takes on a stylized ornate picture frame (Open Omen and psych alike), an intestinal tube (Gut Smut), a vaguely aquiline sil-houette (Spirit Merit), and what might be a wailing face (Killer Instinct and the two suites of four smaller paintings arrayed in the back room, Hour Triumphs and Popular Mantra). Feldman’s titles are unarguably evocative and linguistically playful, but they are generally unreliable guides to meaning: More important is the act of riffing—of gesture and repetition in concert with pared-down graphic symbolism—and of the quick, bold reconfiguration of pictorial (and, especially given the close quarters here, architectural) space.

None of this is not to suggest that the paintings in “High Sign” are expressive in the conventional sense of the term, or that mark-making per se is key to Feldman’s methodology. Rather, her use of acrylic, with its dull plastic sheen, and exclusive reliance on the kind of mid-gray that generally signals the neutral or nondescript but here focuses one’s attention reveal an interest in suppressing painterly surface and texture. What she pursues instead is a visual language that seems oddly transfer-able, that might almost he taken up and applied by anyone with a brush. Yet there is just enough flux and flaw in these works—in, for instance, the spatter of tiny drips that invades their fields of otherwise pure white—that their inimitability is retained. There’s something of the cartoonish corporeality of Carroll Dunham and Sue Williams in the bulbous, bouncy, exuberant forms of these pictures (think again of that false beard). To view them is to be immersed in the colorfully human, and their cool palette does nothing to counter this effect.