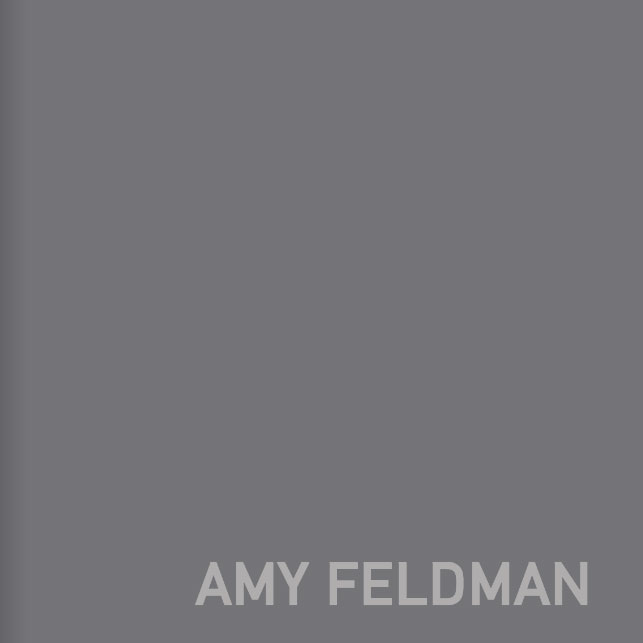 The first time I saw a canvas by Amy Feldman I knew that I instantly had to make room for an important new development in painting. Her work achieved its powerful effect on me not via any radical break with decorum or through some unusual means of paint application or by adopting a new technology (strategies, it must be said, that often lose effectiveness once their novelty evaporates) but through a process that is much more fundamental, and much more difficult making paintings that delve hack into the medium’s history and significantly reconfigure it in response to the sensibility of the artist and the conditions of her time.

One of Feldman’s significant reconfigurations is to create forms that constantly evoke the decorative and the cartoony through a working process that, paradoxically, seems to belong to the realm of gestural painting in its purest state. Let’s make it clear at once that Feldman has no intention of reviving of gestural abstraction; she is a maker of images not of marks; a painter who courts allusion, whose motifs come tantalizingly close to things the mind already knows, even if they aren’t easily nameable. Feldman also joyfully declines all high-production-value, labor-intensive options, instead relishing the virtues of the nonfinito, the provisional, the open.

No matter how large, Feldman’s acrylic paintings are always completed in a single session. If she doesn’t get it right the first time, she compels herself to redo the entire composition again from the beginning. She almost never revises, touches up or adjusts her initial image; it’s pretty much all or nothing. This doesn’t mean, however, that she begins her paintings ex nihilo: they are usually based on small drawings and Feldman will often make a few preliminary marks on the white ground to help guide her rapid execution of the image. In this exhibition, the ideology of the autonomous gesture is further complicated by the effects of mirroring and doubling created by two groups of small paintings in the gallery’s second room, each of which is similar to the large painting Killer Instinct. The slight but continual variations in these paintings display Feldman’s fecundity of invention and her interest in the play of repetition and difference.

Feldman’s ells prima approach introduces a strong performative component into her work, and also a sense of risk, of potential failure, something that was avoided by many painters over a long period of time. After the post-World War II embrace of spontaneity and improvisation la cultural turn that affected literature as well as in visual art, and was in large part a direct response to the fact of jazz), around 1960 painting began to shun improvisation and became more and more risk-averse. While the rhetoric of the artist-as-existential-hero no doubt needed to be challenged, especially when it was no Longer credible in the growing institutionalization, capitallzation and academicizing of contemporary art, something went missing from the studio when painters ceased to see the canvas as, in Harold Rosenberg’s famous formulation, “an arena in which to act.”

In paintings like Feldman’s, the artist’s handling of the brush is in naked evidence; we see every graceful stroke and every awkward turn. In one sense, the painting is a chronicle of how she reacts under pressure. The question of pressure isn’t much discussed in relation to visual art, though it is much more central when we think about, evaluate and enjoy more explicitly physical performances: the pressure felt by a tennis player serving for game point in a grand slam final, the nervousness of a ballet dancer essaying an epic leap, the anxiety of the goalie at the penalty kick. The reason we pay attention to these situations is because it is at such moments that the human body and mind are flung into different orders of being, sometimes attaining moments of beauty, expressivenesss, stamina or grace, sometimes failing at the moment of supreme effort. Feldman’s paintings involve a level of difficulty that is all the more compelling for being achieved with apparent effortlessness.

Like every serious painter Land, remember, serious painters can be great comedians) Feldman is operating under the pressure of history. The impact of her work is inextricably bound up with the dialogue her paintings initiate with the past, a dialogue that is always surprising and deeply felt. When I look at Feldman’s paintings I think about Matisse (bold, sensual, unfussy limning of shape), Guston (quest for the uncanny, speed of execution), Elizabeth Murray Icartoony humor of unwieldy forms), Mary Heilmann (seeming nonchalance), Jonathan Lasker (eloquence of the unadorned graphic stroke), early Ellsworth Kelley [focus on contour and flatness), late Norman Bluhm [ornamental erotics, gesture at the service of baroque designs). Ray Parker [small numbers of large forms, a decline of obvious virtuosity); her work also builds on 20th century virtuosi of curvilinear choreography from Arp and Calder to George Sugarman. By proposing multiple genealogies, Feldman maps out new paths from the present to the past and back again. Equally important, she achieves things you won’t find in any of the oeuvres just cited, in particular the insidious twisting of figure/ground relationships that can make Feldman’s seemingly reductive paintings so complex and even delirious.

This show is titled “High Sign,” a phrase the artist wants to be understood in all its connotations: these are “high” paintings because they require the artist to stretch as she paints (such physicality is crucial to Feldman’s work), and “high” paintings because they seek a kind of euphoria. The five big paintings in the show are, says the artist, intended as a kind of “high five,” an expression of exuberance and optimism. The title reminds us that Feldman is engaged with making signs, which is how Matisse thought of his painting when he spoke to Louis Aragon in 1942 about wanting to impart “the briefest possible indication of the character of the thing. The sign.”

Certain forms and structures run through the paintings in this show, as Feldman seems to give herself the challenge of restating visual ideas in distinctly different ways. Repeatedly, framing devices surround voids, and curving bands and concatenated shapes Mop back into each other. Make no mistake, however, there is rich psychological content Lurking within the decorative punch of these pictures. In Killer Instinct, for instance, the stacked forms (reminiscent of a sculpture by Henry Moore or, maybe better, Charles Long( unleash a narrative of cavities and solids, of separation and attachment, of singularity and doubling that models any number of biological, emotional and social situations. Often, the titles, which employ a kind of condensed poetics and restrained punning that perfectly suits the paintings themselves, point toward this content. In this body of work Feldman’s basic compositional unit is the scalloped edge. Again and again, arcs swell and decline, bulge and deflate, stretch and compress, at times evoking drapery or rotund human figures (there are intentional echoes of the Venus of Wittendorfl or simply—simply?—turn the picture plane into an irresistible spectacle.

It suddenly occurs to me that I’ve said nothing yet about Feldman’s binary palette of gray and white, perhaps the aspect of her paintings that most immediately strikes first-time viewers. Note bene: both the grays and the whites change from painting to painting—in any single canvas the palette may be binary, but across a group of paintings the effects are multifarious and require the viewer to pay close attention to small changes. At the artist’s instructions, the walls and ceilings of Blackston Gallery have been painted two different grays in order to bring increased attention to the all-important edges of the paintings and to underline Feldman’s subtle but crucial spectrum range by introducing a middle value between the grays and whites of paintings.

Gray has frequently been understood a mean of distancing the painter and painting from the emotiveness of color, a cerebral procedure. Feldman’s grays are about something quite different. It is not in quest of neutrality and blandness (which are not, let me hasten to add, necessarily bad things, as anyone familiar Roland Barthes’s The Neutral or Francois Julien’s In Praise of Blandness will know) that Feldman privileges gray. Rather, she endows it with a palpable sensuality, not unlike what designer Charles James did in the 1950s with his sleek gray mohair dress (recently sported by Angelina Jae in The Tourist). Feldman uses gray to intensify the effect of her paintings, to make sure that the viewer misses nothing, not a single drip, not a single slathered brushstroke, not a single positive/negative reversal. This keenly focused palette is one more thing that makes these paintings burn themselves straight into your memory.