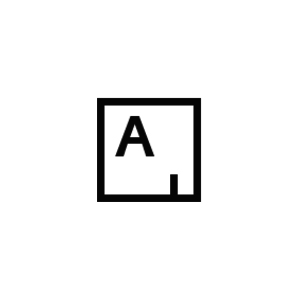 When Amy Feldman makes a painting, she jumps right in. Starting with a quick drawing in marker, she then works with gray acrylic paint on an oversized gray or white canvas; her paintings retain the nonchalant, gestural quality of the original doodles. It’s a quick, efficient method—the works are finished in one session, and never returned to.

“Amy Feldman: Mirror Cool,” the artist’s second show at Reynolds Gallery in Richmond, Virginia, exhibits a group of minimalist, slightly drippy paintings that have an in-your-face quality that owes much to the artist’s instinctual, zero-sum process. The artist sees her works as being like jokes told by a stand up comedian—it’s one shot, so it better be good. “Risk and anxiety are important,” she explains. “I want to communicate a clear urgency and the work must feel immediate and direct.”

This connection to comedy is repeated in her Guston-esque cartoonish shapes, whose blankness allows the viewer to fill in their identifying features—each is almost something, yet not quite. The looming forms become stylized Rorschach tests, a fact that Feldman plays up in her cheeky choice of titles that challenge the viewer; something’s funny here, but the joke is not clear yet. Former Future and Mock Zero (both 2015), look like never-ending intestines or roundabout speech bubbles; I is for Idiot (2015) is almost a splayed animal shape—or is it? Other works plays with the optical effects of figure and ground in the high contrast compositions. The diptych On the Double (2014), might be read as rounded shapes creeping into view on each canvas, or comic-style “POW!” shapes, á la Lichtenstein. Similarly, Modern Moment (2015) can be seen as either the top of a Chaplin-era head, raising its eyebrows inquisitively, or a bird in flight (but maybe that’s just me).

Feldman gives the viewer just enough information to allow her works to coalesce into some significance, but then leaves them there, encouraging the viewer to finish what she started. It’s a trusting gesture, and an effective one—by quickly slapping up a road-map to memory, she achieves the connection between artist, artwork, and viewer, a good sign of a successful artwork.